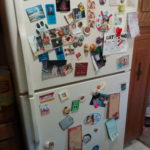 I saw a refrigerator for $25 on a social media sale sight that had just been posted. I don’t really need a refrigerator, but I am getting ready to sell a mobile home that doesn’t have one, so when I saw the $25 price tag, I figured I couldn’t go wrong. So I messaged the lady who had it for sale that I wanted to look at it, but told her I was working and could not come until the next day. She said that would be fine and gave me her address…what a nice lady. Then not ten minutes later, three people had expressed interest in the refrigerator, and every one of them received a cheerful invitation to come right out and give it a gander. Within another twenty minutes, that bad boy was headed down the road in the back of some old pickup, and now sits in some guys basement with a six pack of cheap beer and pack of bologna on it’s shelf. So I wrote this on her sale posting, “Hey Sally Shithead, I thought I was going to look at the fridge tomorrow, you really lacked integrity on this issue!” (By the way, that’s not her real name, I changed it to protect her identity.) She answered me back that she was sorry, but she had sold it to a friend.

The fridge was hers, and she could do whatever she wanted to with it. The issue I have with this whole scenario is that she gave me her word, then immediately reneged on it. It is a huge problem in our society that people have very little integrity anymore. In the biblical book of Matthew, God wrote “Let what you say be simply ‘Yes’ or ‘No’; anything more than this comes from evil.” Matthew 5:37. The point is that if we say we are going to do something or not, it should be as good as done, or not. Our word should be our bond. If you tell your kid that you are taking her to the park on Saturday, you should go unless there’s a tornado or some other extenuating circumstance that makes it impossible. And if your child tells a friend that he will come over to play this afternoon, the invitation he receives to the amusement an hour later is irrelevant, because he already gave someone his word, and a persons word should be as good as a promise. It may seem that going against your word on small issues won’t really make a difference, but you are telling people and teaching your children that you believe it is okay to lie. Soon enough small lies become big lies that are very hard or impossible to deal with. Take it from me, little things matter. Getting into the habit of ordering large fries instead of small when you are in high school can lead to a second chin and a yearning for a well fitting sports bra when you hit fifty! So come on people, be careful of what comes out of your mouth, because if your yes is not yes, and your no is not no, it’s just evil.