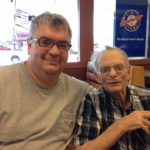 Lately I have been wanting to go down to Casper to visit my Dads grave, even though I never wanted to go and visit him while he was alive. I still went, but it was never pleasant. I think the reason I hated going there so much was because in the last few years, his world had become so small. He was confined to a wheelchair due to back pain, could no longer see anything other than shapes, and had a colostomy bag that he could not take care of very well given his lack of sight. When I visited him, I could not wait to get out of there because I hated to see him suffering so much. Yet I felt bad every time I left because I did not want to leave him to suffer alone. And I always figured that due to his poor health it would be my last goodbye to him. It was such a dichotomy of feelings! But now after his death, the ambivalence I felt is over. Now I want to go there and stand by his grave, and talk to him. I want to drive by the places he used to take us, and pass by his apartment. I want to see his clocks, and hear about the latest gadget he bought. I haven’t been able to make the drive, but last night while I slept, I went to Casper to visit Dad. I went to his grave, drove by our old house, swung by the Red and White Cafe, saw his apartment, and was also able to communicate to him how much I love him, all in a dream that seemed very real. And when I woke up this morning, I felt better.

It often seems that some of Gods greatest mercies aren’t in the form of a grand gesture, they are simple little events that gladden our hearts, or ease our suffering a little…or sometimes both. So Dad, until I join you in heaven, I’ll get see you every once in a while when I’m sleeping. And please do me a favor and say hi to Jesus and Aunt Lois for me.

My favorite book about grief was written by C.S. Lewis. Click on the picture for a link.

Also, if you have lost a child or know someone who has, this book may be helpful.