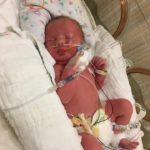 Mrs. Fat Man and I recently became grandparents for the first time when our grandson made his first appearance on the stage of life. We unfortunately have not been able to meet him yet, even though we made a trip to Arizona where he lives. He was born five weeks early and had to stay in the neonatal ICU for a few days. We were not allowed to visit there because there are too many illnesses going around, so they didn’t want to make the babies sick, and neither did we. The little bugger has had some struggles already in life. He was a little distressed in the womb, and the natural birth process is difficult for babies. But it turns out that coming out of birth a little bloody and battered is actually good for the baby both immediately, and in the future. 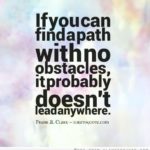 It is the same at every stage of life. As a parent I HATE watching my kids struggle with whatever it is in life that they are going through. But I have to remind myself that this situation will serve them well at some point in their lives. There are times when we may have to intervene, because lets face it, due to inexperience kids are not always the brightest bulbs in the box. But if it’s not going to kill them, maybe we should just let them get hurt a little. The problem with this is that we then have to hurt right along with them. That’s something they don’t prepare you for in parenting books. But every stage in life is kind of like a new birth. Moving from one type of life into another type of life. Infancy to toddlerhood, childhood to the teen years, teen years to adulthood. It’s all hard, and necessary, and good. Much to their relief I’m sure, I won’t be always be here to dole out my oh so abundant advice about life to my kids. But they don’t really learn much from my advice anyway. Life itself seems to be the only teacher that they will really listen to. So I need to become more willing and able to get out of the way and let life squeeze and bloody them up a bit. It’s what’s best for them….but it is oh so hard for me. I sit here at my desk feeling as though my head might pop off if I don’t fix whatever it is that is making them suffer. I have to hold it together though, and so do you when someone you love is suffering.

Besides that, the mess from a spontaneous decapitation would really tick Mrs. Fat Man off, and it wouldn’t do my kids a bit of good either. It sure would be a spectacular exit though!