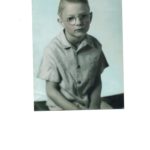 My Dad was born premature and blind on a farm with no electricity in Southwestern Minnesota in 1940. He was taken to the Twin Cities for surgery on his eyes, and was able to gain limited tunnel vision. He once told me that he never did like comic books, because he couldn’t see the whole picture. When he got older, he developed macular degeneration and lost most of the sight he had left. Then about five years ago, he was diagnosed with colon cancer, and received a colostomy bag because of it. He also had emphysema, and back pain that left him unable to walk. He lived by himself in a small apartment, his siblings would call or come check on him several times per week, and Half Sister Fat Man, his daughter from his second marriage took as good of care of him as he would allow. He did not care to be a burden, and rarely ever complained. He was just content with what life had given him, and was able to focus on what made it worth living. For him, that was listening to his radio, and talking to his family whenever he could. He was an incredibly stoic man.

I thought it was a pretty awful life for him, he suffered a lot. We spent a number of years dreading his death, because we knew it was eminent. I consistently prayed that when God took him home, that he would do so mercifully. My hope was that he would go to bed one night and die while sleeping so that he did not have to know that he was alone, and would not have to suffer and spend his last moments struggling for his next breath. It turned out in the end that God answered my prayers so much better than I had hoped for. Dad spent his final few days in an incredibly peaceful hospice facility. He was breathing easy, pain free, clean, and surrounded by the love of his family. He was not alone when he left this life. I was able to read 2 Corinthians from the Bible to him, and I sat right next to him as he took his last shallow breath here on Earth, and took his first full deep breath in Heaven. And when he opened his eyes right after his death, something happened that he had never ever experienced in his whole life. He got to finally see…the whole picture. I am so thankful to God for the way He answered my prayers. It was so kind! 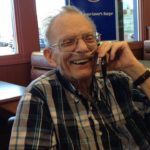