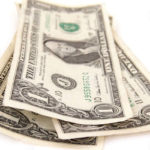 We had my Dad’s funeral this week. He died ten days ago…saying goodbye to him was hard. After his funeral was over, Sister Fat Man, Mrs. Fat Man, the Daughters Fat Man, and I drove around Casper, Wyoming where Sister FM and I lived as children. We went by our old house, and the Nebraska Street apartments where I have my first memory which I wrote about it in a post on here called “Puke Yellow Bedspread and a Ray Gun”. We drove up by an old church by our house, then down 15th Street where there used to be an old Mini Mart store. The store is gone now, but you can still see the concrete footings where it used to stand.

Seeing the spot where it stood took me back over forty years. I was nine years old, and my parents had been divorced for a couple of years at that point. They had a contentious breakup, and the hostility never abated. For a time, we were not allowed to see our Dad because of non-payment of child support. Being nine years old, I did not understand all the ramifications of these adult issues that were happening. And to be real honest, I didn’t much care about them. I just loved my parents, and I wanted to see my Mom struggle less, and I just wanted to see my Dad.

One day I came up with a brilliant plan. I called my Dad after school when my Mom was at work and asked him if he would leave me some money at the Mini Mart. We timed it so that I would pick the money up soon after he left the store so that I would not see him. I had a chubby little friend named Robbie who went with me. When we arrived, the kind lady who worked at the store handed me a small paper sack; when I opened it, there was three one dollar bills inside. As you can imagine, two fat kids made short work of three dollars in a store full of hot dogs and candy bars. It was gone in a flash. But I didn’t care, I just wanted a connection with my Dad. I got to hold the dollars that he held, and spend them any way I wanted; it meant the world to me. After our feast we walked back to my house, and when I came over the hill in front of our place, I saw the police in my driveway. I ran down the hill to talk to the officer named Gary, who was my aunts boyfriend at the time. My Mom had been trying to get a hold of me while she was at work, and I was not home like I was supposed to be. I begged Gary to talk my Mom out of punishing me when she got home. He assured me he would until she drove up and roared out of the car. I think he was just as scared of her as I was…to this day I think he is the wimpiest cop that ever was. So I took my spanking, and if I had it to do over again I would have done the same.

It was an awful thing to live through as a child, being used as a pawn between two people who hated each other. A lot of people might be bitter about this kind of childhood, but I am not. After raising my own kids, I realized that my parents did the very best they could with what they had to work with at the time. They did not know any better, they were just two broken people trying to survive their brokenness. I love my parents and see them as heroic on many levels. So why would I write something like this? So that you will know better! Moms and Dads, do everything in your power to stay together in a healthy marriage. If that doesn’t work, bring in a counselor who will do everything in their power to help you have a healthy marriage. If that doesn’t help, then at the very least be the best and most loving parent and ex-wife or ex-husband you can possibly be. Is it too late and you have already screwed it up? Then stop acting this way, and ask your children to forgive you! Don’t make a life where your kids relish three one dollar bills that happened to be touched by you. Allow them to relish having a LIFE that was touched by you. Work hard today so that when they leave your funeral, they can drive by places that remind them of all the good memories that life with you brought them…not memories that add to their already broken hearts.