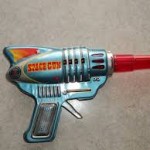 The Fat Man’s first memory was from when he was three years old. I was sitting beside my bed, it had one of those puke yellow bedspreads, the ones with the little ridges running down it. I was playing with a toy ray gun. Not a particularly moving moment in life, but the first memory none the less. I remember earlier today also,  I was on a walk and I was contemplating all sorts of stuff, and had no conscious thought about my physicality. It was just my soul thinking about God’s creation, my children, Sister Fat Man, Grandma Fat Man, and of coarse Mrs. Fat Man, who was sleeping in. The thing that strikes me as profound about the whole thing is that the little three year old boy sitting there playing with that ray gun is the same forty seven year old Fat Man walking and thinking today. The soul, it gains more experience, but it never gets older, or fatter, or grayer, or achier. From what the Fat Man can tell, it never grows old and weak.The soul is the part of me that is always a little bit surprised and perplexed at what he sees in the mirror. Have you ever met a person who at first had some physical flaw that had a neon sign that flashed “look at this”, but after you grew to know and love them, you never really noticed it anymore? It’s because you finally got to know their soul. And since the soul never gets older, fatter, grayer, or achier, I imagine it never dies either. The people out there who believe we just cease to exist upon death, believe something that contradicts experience. They are called annihilationist’s, a sad lot who have little hope. As for the Fat Man, he is going to have to say goodbye to everyone in his life eventually,  as are all of you. But that little kid sitting next to that bed with the yellow bedspread playing with that ray gun tells him that he has hope that he gets to see them again some day. I’ll have some of that!