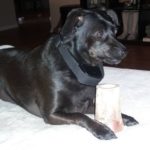 This is Silky. Silky is a little dog that is among sister Fat Man’s arsenal of pets. She’s a mutt, probably half pug and half chihuahua. The first time I ever saw her, she became my favorite. I couldn’t help myself, she has a big old fat pug body with the little chihuahua head, and an under bite that makes her bottom tooth stick out sometimes. Plus she isn’t exactly the sharpest crayon in the box, if she was a human she would be considered to have a blunt normal IQ…heavy on the blunt. What makes her even more endearing is the fact that the other two dogs bully her; over-weight simpletons are always a target. The poor, fat, microcephalic, little dimwit. She needed an advocate, and I was her man.

But everything changed the last time I was visiting sister Fat Man. I sat down in the living room chair, and Silky came over and jumped on my lap to see me. Since she was my favorite, I allowed that easy enough, but then she did something that I consider unforgivable. She let out a big old cat shit burp right in my face… Silky as it turns out, is a noted turd shark. That disgusting dog will eat anything, and her pungent burp established that truth in an avalanche of olfactory assault of epic proportions. So I kicked Silky off of my lap, and declared that I was done with her. Now I am down in Arizona visiting again, and when Silky ran up to see me, my disgust was instantly renewed. My repugnance toward the fat little half wit pug remains intact. The two main lessons that can be taken away from this saga are these:  The Fat Man’s affection is very conditional, and, if you eat cat shit no one will like or respect you… So don’t eat cat shit.