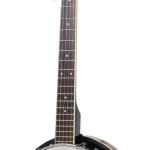 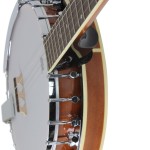 My son just started playing banjo last week. He already plays guitar, mandolin, and some other instrument. I can’t remember what instrument it is, I am still getting to know him. Anyone who follows this blog at all is probably wondering why I talk a blue streak about the three Fat Man daughters, but have never mentioned the son Fat Man before. Well it’s because he is relatively new to the Fat Man clan. He married eldest daughter Fat Man in March of this year. Because of my belief system, I believe that my daughter became one flesh with her husband when they married. At least that is the way things are supposed to be. In the Book of Genesis Chapter two, The NASB bible says,

18 Then the Lord God said, “It is not good for the man to be alone; I will make him a helper suitable for him.” 19 Out of the ground the Lord God formed every beast of the field and every bird of the sky, and brought them to the man to see what he would call them; and whatever the man called a living creature, that was its name. 20 The man gave names to all the cattle, and to the birds of the sky, and to every beast of the field, but for Adam there was not found a helper suitable for him. 21 So the Lord God caused a deep sleep to fall upon the man, and he slept; then He took one of his ribs and closed up the flesh at that place. 22 The Lord God fashioned into a woman the rib which He had taken from the man, and brought her to the man. 23 The man said,

“This is now bone of my bones,
And flesh of my flesh;
She shall be called Woman,
Because she was taken out of Man.”
24 For this reason a man shall leave his father and his mother, and be joined to his wife; and they shall become one flesh.

So, he is now my son! And there is another brave fellow scheduled to join the ranks next spring. Being a Fat Man kid is not an easy task, but to be honest, it is probably much easier that being the boyfriend of one of the Fat Man daughters. Several young men have found that to be a task too vexatious to endure……………the cowardly little cry babies. But these two fella’s have what it takes, and I am pleased with the men they are, and I am confident in and looking forward to the men they will become. I am proud of those kids………………… And I look forward to hearing some banjo picking.