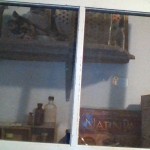 A while back Mrs. Fat Man and I traveled to the town in Wyoming where I grew up the first part of my life, and where my Grandma and Grandpa lived. They have both left us over twenty years ago, but it really seems like I visited them just the other day. Mrs. Fat Man was enduring the trip that I was taking down memory lane, and of course I had to drive by their little two bedroom house on the corner of Holly Street. I was stopped in front of the humble little home and was going through the museum of my memories of which the home provided so many of the artifacts, when Mike walked out of the garage and looked at me. I felt compelled to walk over and explain to him why some old fat guy was stopped in front of his house for so long. As I was talking to this kind man explaining what used to be where, and how Grandpa built that old shed and other things like that, I mentioned the old screen door that hung on the entrance from the garage to the house, and how it used to clack shut because it had a spring on it to pull it closed. He said, “I still have that door out in the shed”. I offered to buy it from him, but he just asked for a couple of hours in order to get it out of the back of the shed. So two hours later I had an old white screen door stuffed in the back of our car. I got it home and inspected it. It still has the white thread where my Grandma made a patch in the screen. Just inside of it my grandparents and Mom and Aunt were sitting around the table having coffee and telling stories. I saw Grandma making a pot of Lima beans for lunch, much to my chagrin, and her giving me a lecture about how during the depression she felt downright lucky to have a lima bean lunch and I should too. But I never did feel lucky, and I hate the taste of lima beans to this day. I saw us sitting around the table playing an old halfbreed game called button. My Grandma was a half breed indian from the Chippewa Cree tribe, she was proud of that name and I never heard her call herself anything else. Then I saw her hanging out the window giving us a dirty look when we were giving my cousin D an atomic wedgie that made his eyes cross. And I saw my two cousins, brother and I line up to get a mouthful of dish soap for calling each other “women”, because according to my Grandma there wasn’t a damned thing wrong with being a woman, and if she ever heard us use that word in such a derogatory way again we were going to get a beating for our disrespect. I could tell a hundred more stories that took place through that old screen door, but I won’t. I imagine you have plenty of your own behind some other screen door. Today it sits in my basement, and is leaned up against the wall and in the way. But it ain’t going anywhere until I do. It has too much of my life just on the other side of it for me to throw it out. I miss you Grandma and Grandpa.