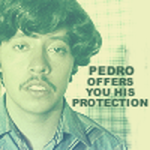 The town where the Fat Man grew up was small. Small enough that most everybody knew most everybody. Like most towns, we had that one particular family that we all kind of just tolerated. They were poor, un-educated, dirty, and the adults were kind of mean. They were trashy people, and had you given them a mansion with a million dollars in it, they just would have been temporarily rich trashy people. They had a lot of kids, eight or nine as I recall, I was about the same age as the older kids, three of them where in high school at the same time as I was. I had the second oldest boy in one of my freshman classes, I’ll just call him C. The  teacher was a young man, not a whole lot older than his students. He was probably fairly cool and popular when he was in high school and college. Mr. R was talking to us one day early in the year, and I am not even sure why he did it, but he singled C out from all the other kids in the class, and ridiculed and belittled him in front of all of us. Of all the kids who he could have chose to treat that way, he chose the one kid who could stand it the least. At that moment, me and everyone else in that class knew that none of us was going to be safe in that classroom ever again. If he would be unkind to the one person who needed kindness the most, we were all potential targets. But if Mr. R had done things differently, and if he not only didn’t bully C, but also did not allow anyone else to bully C, (which was done regularly I might add). The next four years of high school might well have been not only more tolerable, but maybe even more enriching. If the bullying is stopped immediately and fervently by a person in authority, all of the people who are there breath a sigh of relief; including the bully himself. Because the underlying message communicated is, “Everyone is safe here!”

So, if you are a teacher, parent, coach, manager, team captain, or any other kind of leader on a large or very small scale, make the people who you have influence over feel that they can be safe. If your oldest child is picking on his younger sibling, it has to stop, at least in your presence. If the senior soccer player is body checking the freshman, they get pulled out for the rest of the game. If the senior nurse is talking to everyone at the desk about how stupid the new graduate nurse is, tell him/her to help the new grad be successful instead of trying to tear them down. (I have been guilty of that one in case you didn’t guess.) Etcetera, etcetera. I think you get the point. My favorite teacher of all time, and a lot of other peoples favorite one too, we just called her Ms., once was asked what made her such a great teacher. She said, ” I just really tried to do the least amount of damage I could do”. None of us ever got ridiculed in her class. We were all safe there…………….I need to do less damage.