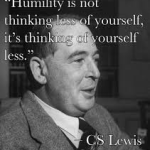 The Fat Man has spent a good portion of the last ten years getting in touch with just how bad he really is. I am not using “bad” the way people often do today to really mean good, I am talking about how I have focused on what a degenerate I am deep in my heart. After all, if everyone could see my worst thoughts from the past month, I am quit sure I would die of embarrassment. I have always taken great pride in the fact that I have a clear picture of just how vile I am, unlike so many of the self righteous types that run in my particular circle. You know, the ones who volunteer at the homeless shelter then post pictures of them doing it all over facebook, or the people who talk about how great their fightless perfect marriage is, or the one’s who wouldn’t say a cuss word even if they stepped in two piles of dog s**t. The perfect people.

I shared my thoughts with my friend who also happens to be my pastor when we met for lunch last week. The conversation ran the gamut from kids and family, to the pious glad handers in the church today, to my clear self awareness. I shared with him that there was no way I could relate to those people who think they are doing pretty good when I spend a good portion of my day remaining vigilant to keep my wicked thoughts and actions in the forefront of my mind. Then my wise young friend hit me right between the eyes, proverbially speaking. He pointed out that I was just as self absorbed as they were, only instead of being wrapped up in my self righteousness, I was wrapped up in self deprecation. I live in the same skewed reality as the do gooder’s, only on the opposite end of the spectrum. How pathetic of me. I want to live a more exemplary life than that! Jesus Christ, Mother Theresa, Ghandi, Sue Henry, Harriet Tubman, and mothers everywhere are all examples of selfless people. If you need examples of self absorbed people, just google “celebrity suicides”; that should be sobering. So at nearly 50 years old, I get to continue down the road of learning how to become a more decent person. You would think that as a person ages and we check character failings off the list, that personal sanctification would become less involved. But in reality, less significant failings were blurred by larger ones, so once the larger ones are dealt with, the blurriness goes away. And a mountain of defects remains before us. I suppose that today the mountain peak of selfishness needs to fade away a little, then tomorrow a little more, and so on. And I hope some day it can be said you and me, “That person lived an exemplary life”. So the journey continues.  Ain’t being a human a trip?