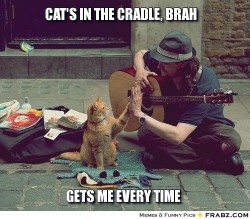 Mrs. Fat Man and I had Friday off together. Our favorite and customary date is to go to garage sales or thrift stores all morning, then have lunch together. We went to a restaurant that we do not usually frequent  just to add a little extra spark to our already raucous day. We were mid pork chop sandwich when a man came in with his very elderly father, and was seated at the table right next to us. I would guess that he was just under 193 years old, but not by much. He had a very fancy cane, but it should have been white with a red end because he was as blind as a bat with no sonar. He weighed all of 110 pounds and was very frail. He must have been able to see at one time, because he spoke of driving. I imagined him to be a shell of the man he once had been. The son appeared so patient with his Dad as he got him sat down safely, in spite of getting his foot wrapped up in the chair leg, and helped him find the water glass that was right in front of his face. It bordered on comical, but probably only to a jaded ER nurse like myself.

Then as their time together progressed, we noted that their conversation was very sparse and even more superficial. The Dad initiated every exchange and the son answered with short terse answers. He seemed as though he just wanted to get it over with, and the Dad just wanted it to be real, and meaningful. We finished our lunch and on our walk back to our car, I told Mrs. Fat Man that I felt bad for the two men. I imagined that the Dad had some kind of job where he was not around very much, or he was just indifferent to his children as they were growing up, or he divorced their mother and wasn’t part of the picture in their life, or one of several other equally somber scenarios. It could well be that none of these things is true for these men, but it is for a lot of people. I hope I can spend the rest of my very short existence on this Earth paying attention to, and loving, and fighting for, and talking to, and cheering on, and helping, and nursing, and providing for, and counseling the people I love and care for. You know, being a good husband, Dad, or friend. I don’t want things to feel uneasy when I’m around the people I have loved and lived for my whole life. I believe it is safe to say that when most relationships die, it is of neglect. People spin it a million different ways, but in reality, neglect is the real killer. So pay attention to your people, otherwise some over zealous garage sale stopping Fat Man with a pork chop in his mouth will feel sorry for you…………..when it really ought to be the other way around.