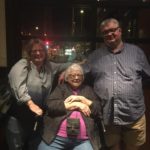 My little sister is really a heroine in life. She left home to go to college right after high school and has been on her own since. She has worked various jobs over the years while being very persistent in her goal to earn her Master’s of Fine Art Degree. She has always been a very close part of our immediate family, yet very independent. The guest room was always called “Sister Fat Man’s room”, because this was every bit as much her home as it was ours. She was always able to, and brave enough to move on to the next city, next adventure, and willing to take the next risk. She could bandage up her broken heart and move on like few people I have ever seen, always coming out on the other side a little bit better. It’s not that she didn’t complain about her situation along the way, she did that a lot. But she would move forward in spite of her fear and angst. The definition of bravery.

About a year and a half ago, it became apparent to her and I that Grandma Fat Man, our mother, could no longer live as she had all her life. Age and illness had made it unsafe to be on her own any longer. So Sister Fat Man packed up her life in Arizona, moved away from her spouse, and moved back to our home town in Wyoming. She took a temporary job as a Professor at the local college, and once again faced a situation that was hard, inconvenient, and that totally turned her life upside down. We went through multiple scenario’s about what to do to see Grandma Fat Man through her elder years. We tried a nursing home for a short while, but it was apparent that it was not the place for her. Finally, the best plan became apparent. We had to move Grandma Fat Man to Arizona. So my little sister worked a full time job teaching, and had to learn on the fly how to be a nurse, estate manager, antique dealer, estate liquidator, and human interactor with a person who was still an authority figure to us, but unable to be so without our help. It was just so much change for a person to bear. I live two hours away, and was of little help to her. She and Sister in Law Fat Man who was still at their home, had a special bathroom put into their house, arranged a bedroom for her, and made it a safe place for Grandma Fat Man to live. They are now almost a year in to their new existence. Sister FM’s dreams and goals changed for now, she gets the great honor and joy of helping our Mom through this stage in her life. It is not an easy venture. But in our conversations she has said how good it is that she gets to do it. My little sister once again mustered the courage to go into the battle that is this life, and face a situation that so many people will not face.