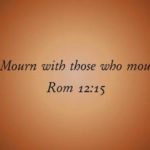 I’ve been an ER nurse for almost twenty five years now, and I am frequently asked what the worst injury I have ever seen was. I always say, “A broken heart, because most people don’t die from it, and it can’t be fixed.” If a person gets killed, they are just dead. It was bound to happen to them, and they have moved on to the next life. Death was their destiny all along, as it is with all of us. If someone suffers severe injuries and does not die, they will generally get better, or will adjust to their disability. But those broken hearts, they last a lifetime.

A few years back, I interviewed a man named Sam who was in his ninth decade of life. He had a son who had died at age twenty four, it had happened fifty years prior to our interview. As we were talking about his son, Sam was crying. It was not just a tear running down his face, it was a 92 year old man wailing as he lamented for his son who had died in the 1960’s. That was when it became very clear to me that broken hearts never completely heal.

I have chosen a profession in which I get the honor of helping people begin their long walk through grief, and I would make the same choice of profession today. One of the few real negatives about it is that I have to live with the constant awareness that my turn to suffer the worst injury ever is coming. I try to ignore that harsh little reality, but then a mother has to say goodbye to her son, or a child says goodbye to her Dad, and I stand beside them powerless against their suffering. It is enough to crack the crustiest of old ER nurses.  So please do me a favor, if you have not lost someone you love today, take advantage of your intact heart. Be kind, give a hug, say a kind word, find some way to express your love for them. And if you know someone who is grieving, share in it with them, it soothes their pain. Then if you are fortunate, perhaps someone will do the same for you…when it’s your turn.